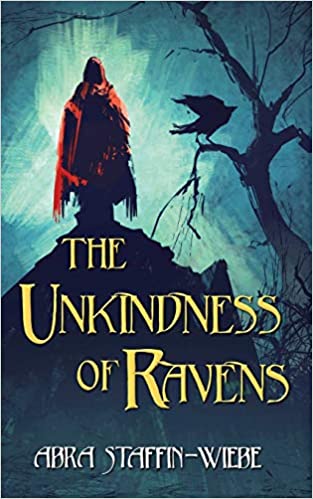 What's worse than being ignored by your god?

The oba is dead. Nobody wears the beaded crown.

The Eight Great Houses are under attack ... and they are losing.

As the royal heir from House Crow, Anari is desperate to protect his people from a plague-driven war.

Without the blessing of his god, he doesn't have the magical power to compete in the succession battle for the crown of the oba. He is easy prey for the strongest heirs. To stay alive, he must be quick and clever.

When his plans go wrong, he does the unthinkable.

Worse is having your god owe you a favor. Particularly when he's a trickster.

Anari might not become the ruler of his people, but he has won his god's undivided attention. If he can survive what he's put in motion, he will have one chance to save them all.

Fortunately, Anari has a few tricks up his own sleeve ...

The Unkindness of Ravens is an epic fantasy story about trickster gods and favors owed. This is a novella, so it is very short for a book.

Abra Staffin-Wiebe loves dark science fiction, futuristic fairy tales, and cheerful horror. Dozens of her stories have appeared at award-winning publications including Tor.com, F&SF, Escape Pod, and Fireside Magazine. She lives in Minneapolis, where she wrangles her children, pets, and the mad scientist she keeps in the attic. When not writing or wrangling, she collects folk tales and photographs whatever stands still long enough to allow it. Join her newsletter and discover more of her fiction at her website, http://www.aswiebe.com. View all posts by Abra Staffin-Wiebe

No archives to show.

No comments to show.